Description:
The Vortex wargame is currently composed of 27 levels. Most files you need are in /vortex/.

Your goal is to connect to port 5842 on vortex.labs.overthewire.org and read in 4 unsigned integers in host byte order. Add these integers together and send back the results to get a username and password for vortex1. This information can be used to log in using SSH.

Note: vortex is on an 32bit x86 machine (meaning, a little endian architecture)

I write a script to handle this challenge.

First, it makes a connection and get 16 bytes for 4 unsigned integers. Later, it uses unpack to get those 4 numbers and add them together. We need to send back an unsigned integer, but the sum may overflow. To solve this problem, we need to let the sum mod 256^4.

After we pack and send it back, we can get the information 'Username: vortex1 Password: Gq#qu3bF3'.

We are looking for a specific value in ptr. You may need to consider how bash handles EOF.

It is a very simple tar function. But we need to be careful that it does not use option -P, so we cannot use absolute names in files.

And we can get the flag 64ncXTvx#.

This level is pretty straight forward. Just sit down and understand what the code is doing. Your shellcode will require a setuid(LEVEL4_UID) since bash drops effective privileges. You could alternatively write a quick setuid(geteuid()) wrapper around bash.

NOTE: ctors/dtors might no longer be writable, although this level is compiled with -Wl,-z,norelro. Lookup some information about this

If we look at the code, we can see that with 132 bytes paddings we can overwrite the value in lpp. Later, the address of buf will be stored in the space, which is content of lpp as address, and the space of that address’s content as address, and it will call exit(0).

Take a look at exit, it will jump to 0x8049734, if we can make its content to the address of our shellcode, we can get the shell and the flag.

And we can get the shell and the flag 2YmgK1=jw.

This is the common format string bug, exploit it with care though as a check is made with argc. What is the layout of a process’s memory? How are programs executed?

In this challenge, we can use format string vulnerability to modify GOT.

Since argc needs to be 0, we need to use a C program as wrapper. exit is going to jump to the content in the address 0x0804a014. We need to modify its content.

And we can get the shell and the flag :4VtbC4lr.

A password is required for the next level. vortex5.c and md5.h. a-z,A-Z,0-9 is the search space. The password length is 5 chars long, it was originally 7 chars long.

This challenge is very simple, we only need to look at the main function.

And we can get the shell and the flag *uy5qDRb2.

You must disassemble this level’s exploitable application in order to find the hole.

When we replace AAAA to /bin/sh, we can get the shell and the flag Y52jxHtt/.

This level requires CRC_32(argv[1], strlen(argv[1])) to be 0xe1ca95ee. You might need to extract the crc tables from the program.

In this challenge, with buffer overflow, we can get the shell easily. However, we need to pass the check of crc32.

From gdb, we know we need 74 bytes paddings and after we put the shellcode in the environment variable, its address is 0xffffdecc. So we can execute /vortex/vortex7 $(python -c 'print("A"*74+"\xcc\xde\xff\xff")'), but we cannot not get the shell yet. We got 0x4759f8c9, which is the crc32 value.

After using this technique, we can get the appending value 0x3da97bf1. 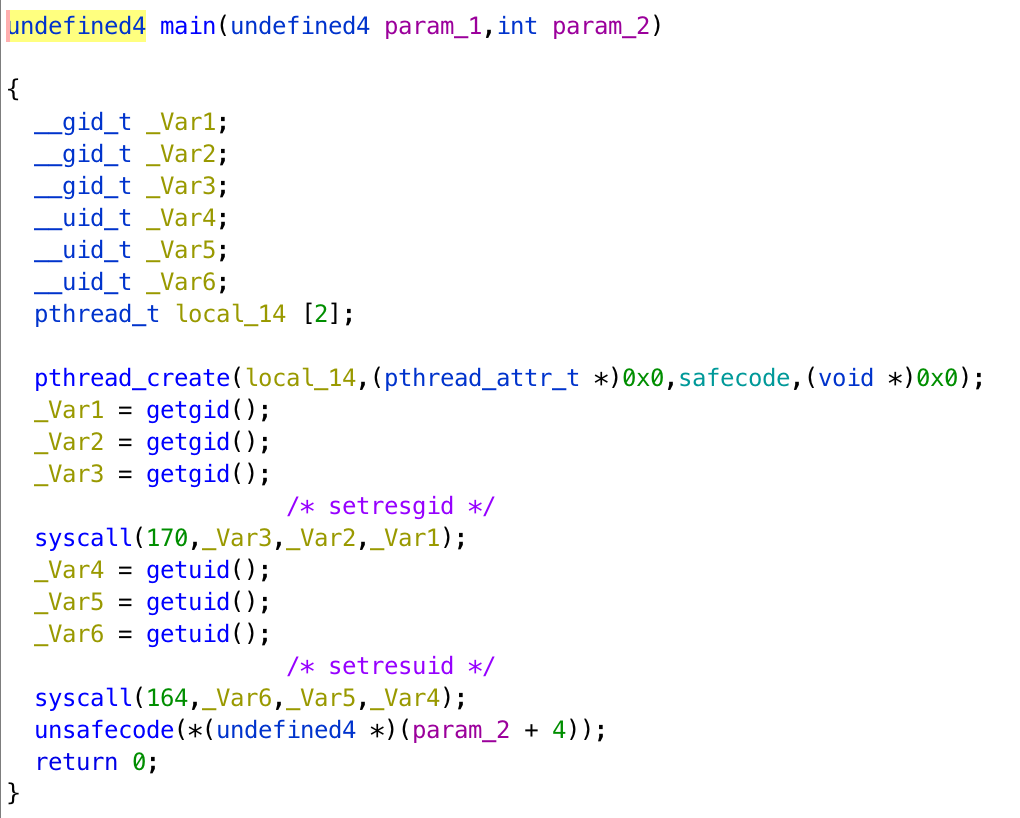 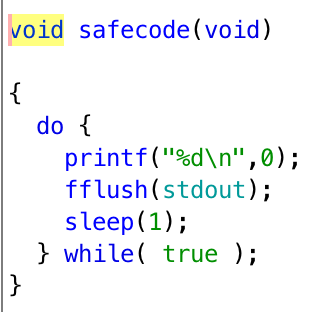 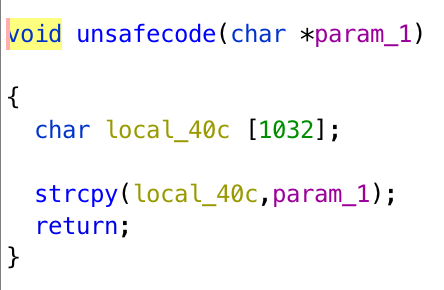 It creates a thread to execute safecode, drop the privilege, and executes unsafecode. We can do buffer overflow in unsafecode easily, but since it does not have priviledge, getting the shell is not an option.

What we can do is put our shellcode when executing strcpy, and jump back to the stack to execute it. For this shellcode, what it does is that it puts the address of our another shellcode, which is going to be stored in environment variable, to the address printf is going to jump to. In the privileged thread, when it executes printf, and we can get the shell.

printf will jump to 0x804a00c, we can replace it with 0xffffdecc, which is where our shellcode is stored in the environment variable. We do it with assembly code.

The start of the stack is at 0xffffce90, when we return to it, the shellcode on the stack will modify the address in printf function, and we add \xeb\xfe in behind to create a self-loop because if the main thread dies, then the program will terminate, and we cannot get the shell from the child process.

We get the shell and the flag ci41)GJhb.

There is no information available for this level. Login to vortex.labs.overthewire.org and check it out.

When we login, we will see You have mail.. After checking /var/spool/mail, we can see that there is a file vortex9 in the directory, and it contains the password 5WT0}swdc.

Read in 20 integers and write the seed used to generate those numbers in unsigned little endian format. You have a time limit of 30 seconds to do this. You must login to vortex.labs.overthewire.org

First, we can create a C program to find the seed with brute force. We can find that magic1 is always between 100 and 400, and magic2 is the second passed from a fixed time, so if we execute the program right after /vortex/vortex10, we can get nearly the same magic2, add 5 seconds at most.

We create a program nearly the same as the pseudocode, except that we are not sure the real magic1 and magic2, so we give it a range to seed, from seed - 300 to seed + 5 + 300, which matches the restriction of magic1 and magic2.

Besides, since we can execute rand(), which is directly related to magic1, with no time gaps, we can give magic1 a range from 100 to 400.

Later, we can create a python program to wrap it up. We use it to execute /vortex/vortex10 and get the first and second number. We pass the data to another process /tmp/l3o/pwn, which is the C program provided above, to find the seed.

When we find the seed, we pack it in unsigned int, little endian, and send it pack to /vortex/vortex10, and finally, we can get the shell and the flag %8sLEszy9.

You must corrupt the heap in order to gain arbitrary control of this program. Do recall, the application is using phkmalloc. 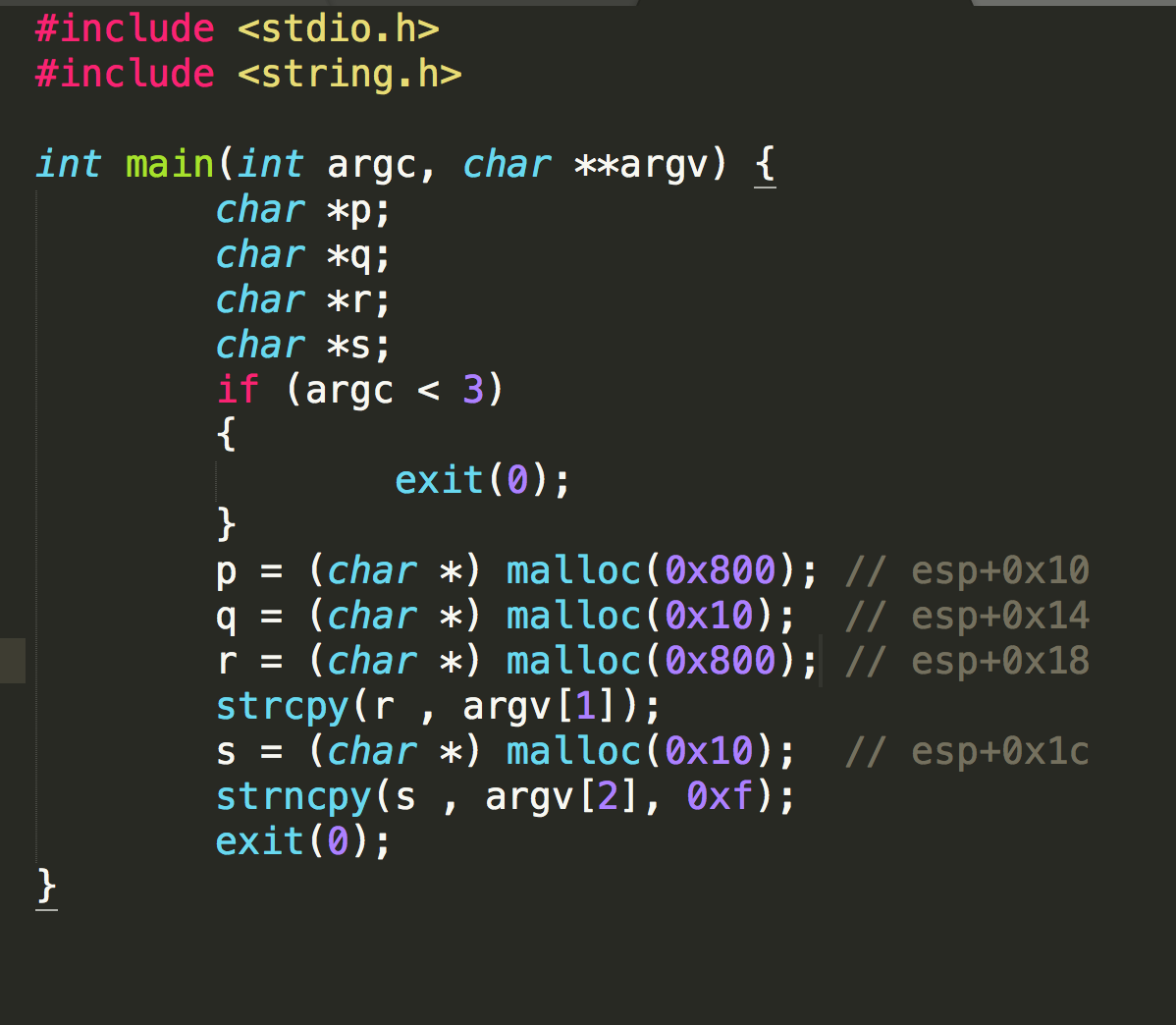 We find that we can have 2052 bytes paddings in argv[1], after that, it will be a segmentation fault.

The reason is that the address stored in s, which is going to be the place to store argv[2], will be modified.

What we can do is that we can make that address to an ideal place, which is the address exit@plt is going to jump, and write the address of our shellcode in it.

We can get the flag nKV95q]dx.

Exploit this level knowing that the stack is not executable. You must login to vortex.labs.overthewire.org to complete this level..

If we decompile the program, we can find that pseudocode is exactly the same as Level 8 -> Level 9, but this time, the stack is not executable.

We can use strcpy to make printf jump to system, and create an executable called %d.

In this challenge, we need 1036 bytes paddings to control EIP. However, there is a problem, the address of strcpy contains \x00, so I cannot use it directly.

We create an executable named %d, and it will get password for us. Besides, we need to do export PATH="/tmp/l3o:$PATH" for system("%d\n", 0) to find our executable.

How big is your shellcode? This level has a non-executable stack. You must login to vortex.labs.overthewire.org to complete this level. 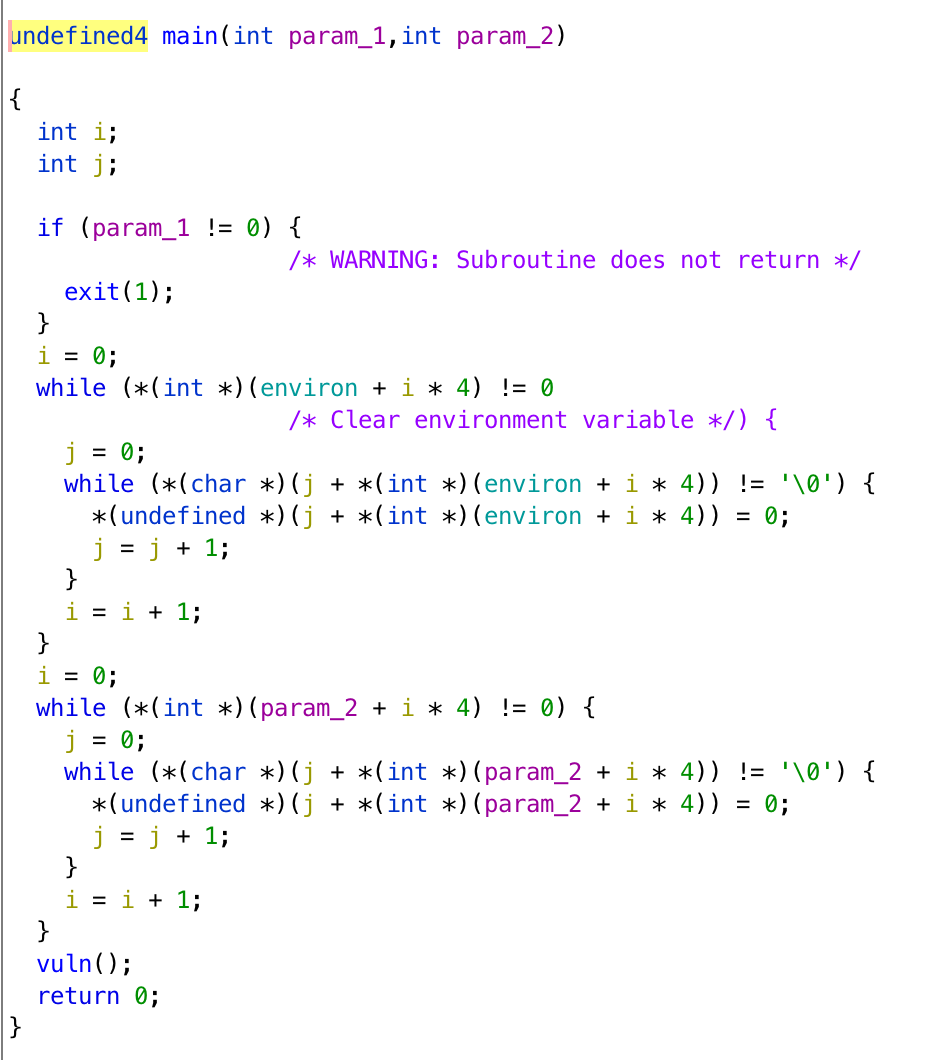 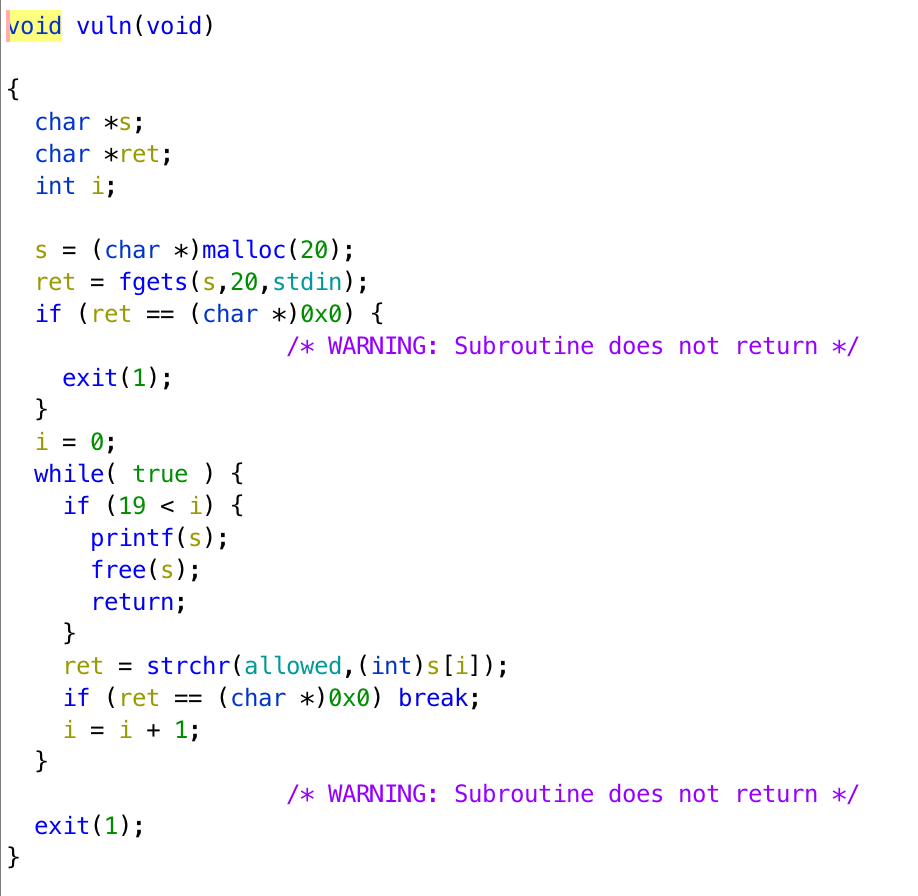 The stack is not executable, and there are only 20 bytes for us to put on the stack. Moreover, in the main function, it erases all the environment variables, and we are not able to pass arguments when we run the program. Finally, in strchr, there is allowed, which contains ABCDEFGHIJKLMNOPQRSTUVWXYZabcdefghijklmnopqrstuvwxyz 0123456789%.$\n. If one of our input character is not in this string, it will not execute printf, but exit directly. This challenge is really a difficult one.

However, I found that it actually put the program name /vortex/vortex13 on the bottom of the stack, it could be a chance by creating a symbolic link with an ideal name.

What we can do is to make ebp to 0xffffdfe4, and it contains 0xffffde78, which is the ebp address when executing main function. After vuln finished, eip will keep executing codes in the main function, and that is return. So, it will execute leave and ret, making ebp to 0xffffde78 and esp on 0xffffdfe8, and it contains 0xf7e62e70, which is the address of system. EIP will jump to it and take the content in address 0xffffdff5 as argument, which is sh, and we can get the shell.

Finally, we get the flag DL73}uzdh.

Based on something seen in the “real world”, it has weak encryption usage, used over a TCP/IP connection. This level requires you to apply some logic to the challenge at hand. You must login to vortex.labs.overthewire.org to complete this level.

After looking for some “weak” encryption algorithm used over TCP/IP connection, I found that it seems to be RC4.

It gives us this text file. Every traffic starts either using 0x3e or 0x3c, and they always ends with 0x0a.

The first traffic should be used to transfer the key, and the last two messages are encrypted by this key.

key1 should be reassign when it is going to decrypt the second message because once the key is used with encryption or decryption, the key will change.

And we can get the flag 3J=oL5fce.

You have found an encrypted file, decrypt it (some reversing, crypt and general analysis needed, and if you’re lazy, the password is 8-bytes long and contains values between A and Z). You must login to vortex.labs.overthewire.org to complete this level.

We get two files, vortex15, which is a program for encrypting and decrypting, and vortex15.tar.Z.enc, which is a encrypted tar file.

If we decompile vortex15, we can get its pseudocode as follows. 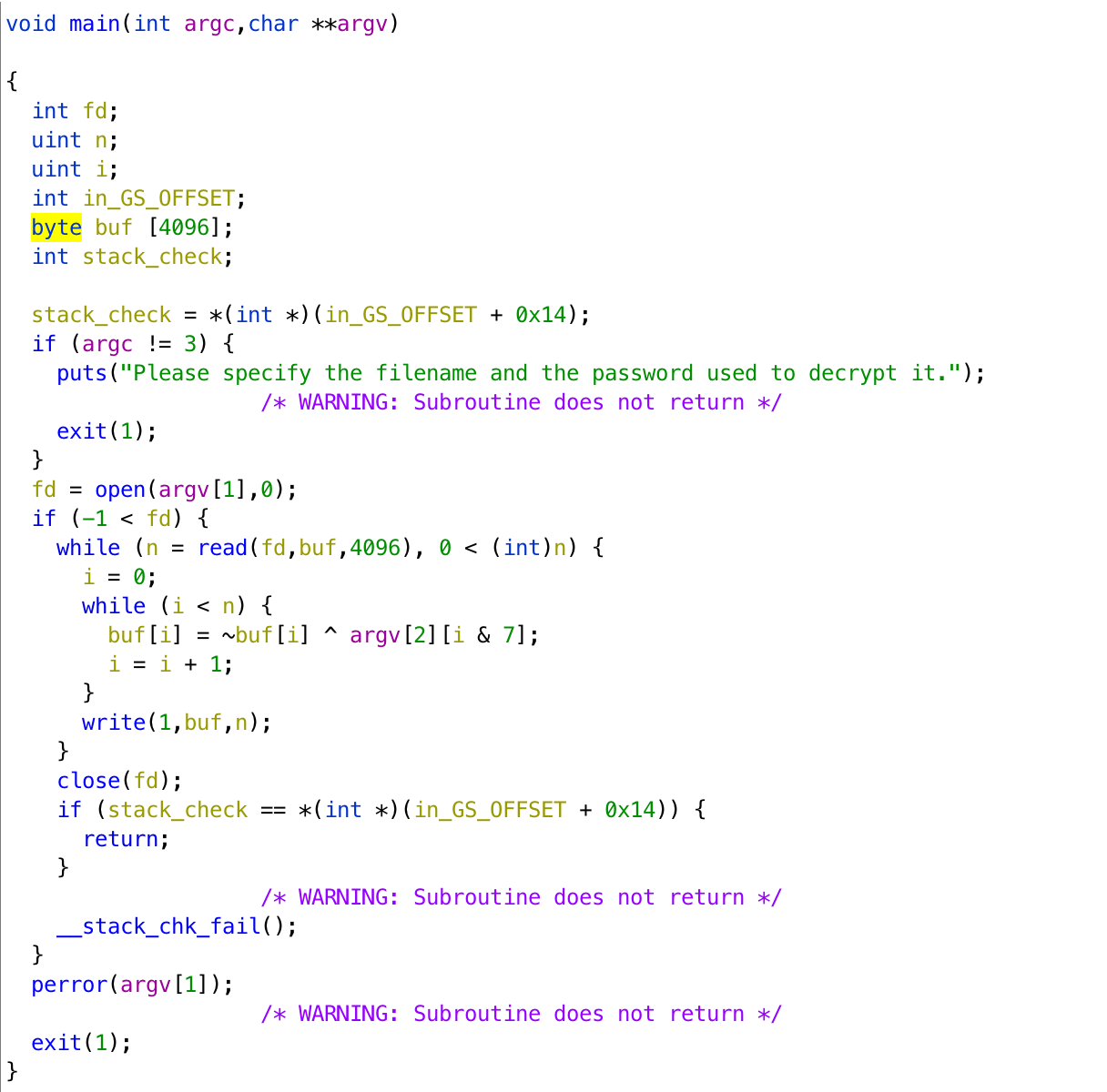 We can see that it encrypts the data by giving it a bitwise not and xor with the key, and it can be recovered by giving the same key to the file encrypted.

If we brute force right now, we still need to run with 5 unknown characters in keys, that is 11881376 combinations.

We can use the following program to find the key.